You Are Your Own Gym - app review

If I were to say that I am no longer in the springtime of my youth, I would be considerably understating the matter. These days if ever I claim to be “pretty fit” I always feel obliged to add “for my age”. My New Year’s Resolution this year, was to do something to improve my existing fitness level.  And the first weapon in my fitness armoury is the iOS app, You Are Your Own Gym.

Currently my main form of exercise (apart from walking my dogs) is Aikido. This is a Japanese martial art that I either teach or study three times a week. In fact, it was the Aikido that made me realise I needed to work on my fitness. It is a physically demanding art and, to be honest, I am increasingly finding it hard to live up to those demands. When I posed a question about fitness training for the older martial artist (in a Facebook group called, rather colourfully, Old Farts Martial Arts) one of the recommendations a fellow martial artist made was the You Are Your Own Gym iOS app. I duly bought and installed the app on my iPad (a mere $2.99 – it is also available for Android).

The app itself has over 200 ‘bodyweight’ exercises that can be performed at home, or wherever else you happen to be, without using any special equipment. Most exercises can be done standing or lying on the floor or using everyday items such as tables, chairs, doors and towels. You can create your own exercise programs or (as I am doing) you can follow  a pre-defined 10 week course. The app comes with four 10-week workouts for beginners through to experts. Each of the beginner-level workouts take around 20 to 36 minutes or so to complete including some rest periods between exercises but no including warm-ups and cool-downs which may add on another 10 or 20 minutes. Higher-level workouts can take a bit longer. The exercises are all shown in video clips and there are text-based instructions to provide more details.

The first time I used the app I made the mistake of trying to keep pace with the video display. Having failed to do so I ended up in an exhausted heap on the floor. It was only then that I realised that the video clips run in an endless loop and they are there to show the correct form, not to set pace for the user! In fact, each exercise should only be done for the indicated number of repetitions. The precise workout varies from day to day – some days require more stamina, others require more strength. Also the target muscle-groups change from one session to the next so there is plenty of variety to avoid boredom, and plenty of time for specific muscle groups to recover in time for their next targeted session.

Overall I am mightily impressed by this application. I’ve been using it for over six weeks and so far I haven’t missed a single of the four sessions per week which I’ve scheduled for myself. The exercises are well explained and demonstrated, the workouts are well designed and the production quality is first rate. There are just two minor criticisms: 1) a friendly introduction video would have been useful to give an overview of exactly how to use the app and 2) more warm-up and cool-down routines would have been good to have. The app has just two warm-ups and cool-downs which are presented as fixed sets of exercises which (unlike the exercises in the rest of the app) allow for no variation. But those niggles aside, this is a fantastic app – well worth the mere $2.99 I paid for it.

The app creator, Mark Lauren, also has a DVD set and a ‘You Are Your Own Gym’ book. Having used the app for a couple of weeks I decided to buy the book too, as it is useful as an ‘offline reference’. However, the book is by no means a requirement. The app is a fully self-contained training guide. If you need to get fit and don’t want to go to a gym in order to do so, this app is well worth getting. If you are serious about getting fit, I strongly recommend it!

Posted by Huw Collingbourne at 08:10

A competitor to the Raspberry Pi? Dermot Hogan tests out a new $65 computer-on-a-board…

Imagination Technologies have recently released a new Single Board Computer (SBC) with support for Android and Linux. Unlike its competitor Raspberry Pi (there are other similar competitors such as  BeagleBone Black and Hardkernel’s ODROID) it uses a dual core 1.2GHz MIPS processor. Also, unlike the Raspberry Pi, it comes with 1GB memory, 4GB on board storage, the default OS (Linux) in flash memory, a real time clock and  built in WIFI and Bluetooth. 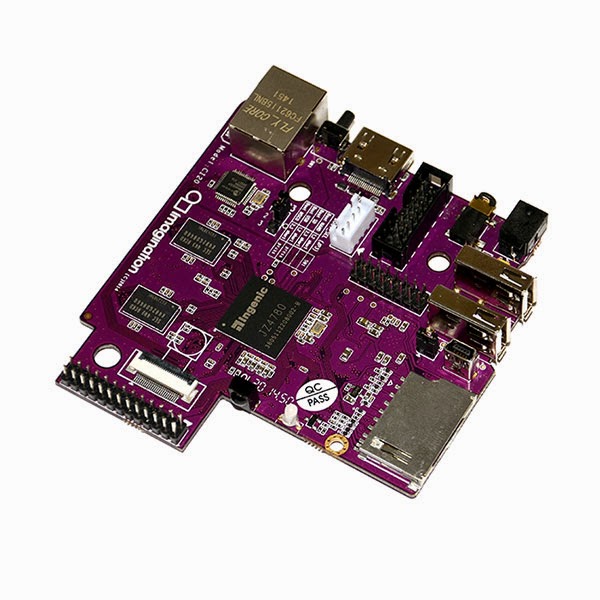 The added extra features mean the you basically just plug it into a USB keyboard and HDMI monitor, connect the (supplied) 5V power adaptor, wait for about 30 seconds and – you have a functioning system. All I then had to do was change the network configuration file to enable connection to my WIFI network and I was in business. With Samba installed I could switch development from my Raspberry Pi to the CI20 with a few mouse clicks.

So how does it compare to a Pi? Well, the Pi comes in two versions, A+ and B+. The B+ version has 512MB RAM, an Ethernet port and 4 USB ports. The A+ has 256MB RAM and a single, solitary USB port. The Raspberry Pi is a lot cheaper (around £15 ex VAT for A+ and £25 ex VAT ) but you don’t get an SD card, power supply or WIFI adapter thrown in. Add these and you can add an extra £10 to £15 to the price of the basic Pi. Also, with a Pi you have to download the operating system, create the SD card and figure out how to add the WIFI adapter (it took me a few attempts before getting it to work). With the CI20, you just turn it on and - it works. The downside, of course is the increased cost (around £50 inc. VAT).

Imagination seem to be aiming at the Raspberry Pi market. Specifically, there is a 26-pin GPIO extension header which is pin for pin compatible with the old style Raspberry Pi header and is also therefore usable with the new 40-pin header. However, Imagination is clearly targeting the high end Raspberry Pi user who wants rather more than the somewhat feeble 700MHz ARM chip with a limited amount of memory. With a 1.2GHz dual-core and 1GB of memory, you can do some serious desktop work. For example, I’ve tried running an IDE on the Raspberry Pi and it really, really struggled. I think that the CI20 might have a better chance with something like this and from the Imagination demos seems to be capable of running games and streaming video. However, it still doesn’t really compare with a 3GHz, 16GB Intel system with 4 monitors (my usual desktop environment). I now do all my development on a PC using NetBeans to remotely compile on the Pi and I would continue to do the same with the CI20.

But what’s not so good with the CI20 is the available resources. For example, I could not find an I2C driver for the card - there’s probably one there somewhere (I found some source code) but it doesn’t seem to be a standard item as yet. With a Raspberry Pi, things like this (and support) are very easy to find. This isn’t surprising as the CI20 has only just been released and, no doubt, drivers and other support will be available very soon. But it does indicate the level of expertise you need to use the CI20: if you want an I2C driver, you may well have locate a suitable source and compile it into the kernel yourself. Another (minor) niggle is the eccentric location of the mounting holes. There are three of them that look to be in random locations on the board. The original Raspberry Pi had the same problem, which has now been corrected to a regular square layout. Speaking from experience with the original Pi B, it’s a lot easier to mount if the dimensions are simple and rectangular.

The CI20 has an impressive specification compared with its rivals. Look at the comparison in the table below – you do get quite a bit more for the extra cost. 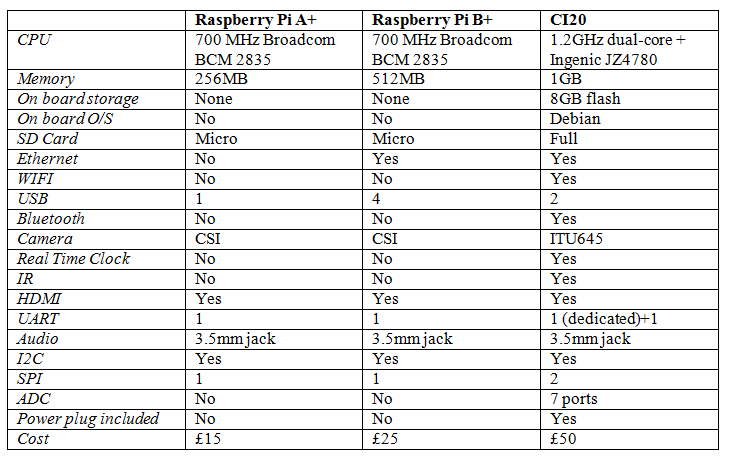 If you need a good graphics processor, a powerful CPU and more of a system-on-a-board than the current Raspberry Pi provides, then the IC20 would be a good choice. However, Raspberry Pi is not standing still. The Raspberry Pi 2 has now been announced: quad-core, 900MHz CPU, 1GB RAM and (gasp!) free Windows 10 support! The race is on …

Posted by Huw Collingbourne at 03:32