With a new multi-camera editor and motion-tracking, improved performance and more video and audio effects, Corel VideoStudio X9 is aiming to appeal to serious video makers on a tight budget. The software comes in two editions - VideoStudio Pro X9 at £59.99 (inc VAT) and VideoStudio Ultimate X9 at £79.99. The principal difference is that the Ultimate edition supports up to six cameras in its multi-camera editor (Pro supports four) and it comes with more video-enhancing effects and filters. Corel has a version comparison chart here: http://www.videostudiopro.com/en/products/videostudio/pro/#compare 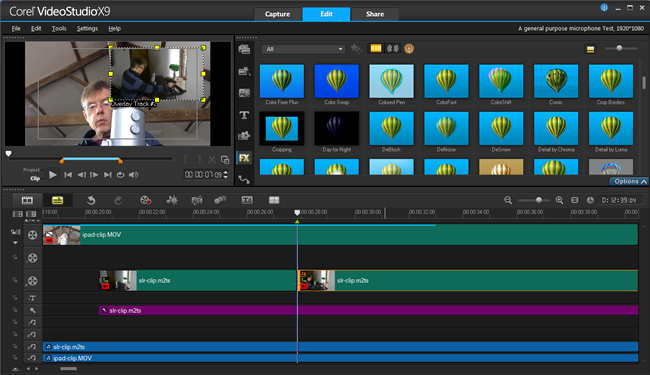 I last reviewed Corel VideoStudio back in 2011 (version X4) http://www.bitwisemag.com/2/Corel-VideoStudio-Pro-X4.html. At first sight, X9 looks pretty similar to X4: its main editing screen is divided into three areas with the multi-track timeline, where you arrange your video and audio clips, occupying the bottom half. This leaves the top half of the screen divided between the video preview and the Library which is where your source files are arranged.

To the left of the Library there is a set of buttons that can be clicked in order to browse through sets of Transitions (fades, wipes, page-folding effects and so on), Titles (to add animated text effects), Graphics (static images), Effects (everything from coloured ‘filters’ to sparkles, ripples, distortion effects and rotations), and Paths (to move selected videos in predefined directions). In addition a set of ‘Instant Projects’ are supplied. Drag one of these onto the timeline and it will automatically add a whole set of graphics, effects and ‘placeholders’ to be replaced by your video clips - this may be useful to novice users and could also be a time-saver if, for example, you need to add a slick intro or outro to a video in a hurry.

In addition to the video editing environment there are also ‘Capture’ and ‘Share’ environments. You can select these by clicking tabs at the top of the screen. In the Capture area you can grab video from a connected camera or you can start the screen capture tool to record video direct from your computer screen.

The Share workspace is where you produce and save your video. Here you can select various video formats - AVI, MOV, WMV, MPG-4 and so on - and make adjustments to the size, frame-rate and other parameters.

One of the things I commonly need to do is to synchronize two clips (either two videos shot simultaneously by two cameras or else a video clip with an audio track recorded using a separate microphone). Some video editors let you synchronize by aligning the wave-forms by eye - that is, by looking at the audio ‘graph’ on two tracks and simply matching up the peaks and troughs. Others have built-in tools to analyze and synchronize automatically. VideoStudio doesn’t show a ‘live’ view of the wave-form to aligning tracks by eye is a non-starter. It does have a multi-camera editor, however, which is a popup window into which multiple tracks can be imported and auto-synchronized. This works reasonably well, but it is not as simple and convenient as the sound sync tool in Cyberlink PowerDirector which just lets you select two tracks in the main editing window and immediately synchronize them.

When working with sound you can enable the Sound Mixer tool which lets you set audio points on a selected track and make adjustments to the volume and stereo balance. A new Normalize Audio tool lets you select multiple clips and automatically adjust the volume so that clips recorded at a lower volume are boosted to about the same level as clips recorded at a higher volume.

A new tracking feature lets you select a point or an area (such as a face or a person) and generate a ‘tracking path’ that represents the motion of the selected object throughout a video clip. You can then have that objects pixellated (to hide someone’s identity or blur out sensitive information) or you can use the track to add another object such as a piece of text or a small video clip so that this object moves over the main video, following the tracking path. This is a useful feature but it can be quite fiddly to use as you have to pop up two lots of dialogs - one to create the path, another to add an object to it.

In addition to these and a few other new features (including some editing and performance improvements plus the addition of new file formats aimed at optimizing file sizes with high definition videos) VideoStudio also has all the features you would expect of any decent video editing package. It lets you split and copy clips, it lets you zoom and crop, adjust the speed and make slow-motion and stop motion videos. It comes with a screen capture tool so you can create screencasts by recording direct from your computer’s screen. It has a fairly large collection of transitions and fancy visual effects to alter the colour scheme or add distortions and artistic effects (such as sketch and emboss) to your videos.

All in all, it’s a decent, good-value, video editor. I find some of its tools (such as the motion tracker) over-fussy and some of its effects a bit too gee-whiz for use in videos that aim to look reasonably professional. Overall, I don’t think it is as good as Cyberlink’s PowerDirector 14 (see my review http://bitwisemag.blogspot.co.uk/2015/10/powerdirector-14-review.html) which, at a starting price of around £60, is a clear competitor. PowerDirector itself is far from perfect. Some of its tools (such as Zoom and Crop) are harder to use than they need to be, it too fails to show a ‘live’ draggable view of audio wave-forms and, in my experience, it has some reliability problems (it can suddenly exit when you are least expecting it). Nevertheless, I think PowerDirector is a more satisfactory editing package overall.

Posted by Huw Collingbourne at 03:27