PowerDirector is my number one choice of video editing packages on Windows for serious video makers on a tight budget. If that’s all you need to know, skip the rest of the review and go and buy it. But, while I am generally enthusiastic about this product, there are also things I don’t like about it. So if you want a more balanced overview, read on. 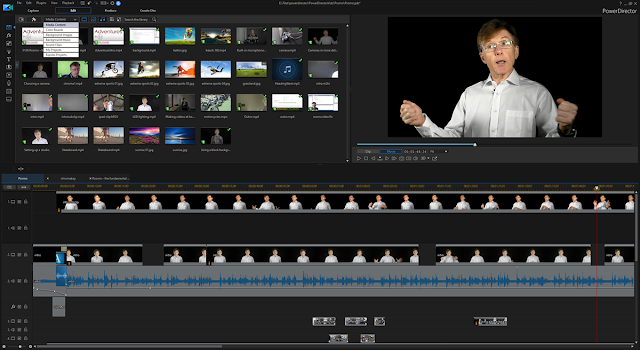 For those of you who are unfamiliar with PowerDirector, let me begin with a brief overview. This is a video-editing package that lets you import video and audio clips and edit them on multiple tracks arranged on a horizontal timeline. You can cut, copy and move clips. You can apply ‘transitions’ to fade one clip into another with optional effects such as wipes, dissolves and so forth. You can change the colours of video clips, make them look like old black and white films or cartoons and apply a whole batch of other snazzy effects. Once you’ve finished editing, you can produce the final video in a range of common formats. One of the most striking features of PowerDirector is its production speed. In my experience, it can render videos significantly more rapidly than any other video editing package I’ve used. For a more in-depth look at its core features, refer to my reviews of previous versions: PowerDirector 16 and PowerDirector 15.

OK, but what’s new in this latest release?

One of the most useful improvements is the integrated audio editing. In previous releases, if you wanted to do anything more than very basic edition editing (cutting, volume control and son on) you were obliged to launch the audio clip into a separate Wave Editor program, or another audio editor of your choosing. Now PowerDirector 17 now pretty decent audio editing capabilities in a popup editor window. This includes effects such as Reverb, Pitch-shift and Noise reduction.

Chroma Key (‘green screen’) has been improved too.  Most video editors provide some kind of Chroma Key facility to remove plain background colours and substitute an image or video into the background – but often this only works well if you have an absolutely perfectly illuminated green screen. Many of us do green-screening in our offices, studios or bedrooms, with very imperfect lighting. Getting a good ‘key’ in these circumstances can be difficult, resulting in jagged edges and green fringes around the foreground performer. The previous version of PowerDirector did a reasonable job of dealing with badly-lit backdrops. The new version goes further by letting you select up to three ‘samples’ from the background to improve the accuracy of colour removal. This can be a bit tricky to use, however, because once one key has been applied, most of the background disappears, making it hard to select a second key. It would be better if each of the three keys could be toggled on and off to make selection of the remaining keys easier.

If, like me, you often create small projects – with each project forming a single ‘scene’ of a larger video – one of the annoying things you will come across is the problem of integrating your smaller projects into the bigger one. PowerDirector 17 has added a ‘nested project’ feature to deal with that. Now you can import other PowerDirector projects into the project you are currently editing. The imported project can then be dragged as a single unit onto the timeline. It can also be edited in its own tabbed timeline area. This is an extremely useful new feature.

You can also ‘precut’ video clips prior to placing them onto the timeline. Let me explain. Imagine that you’ve imported a two minute clip but you only want to use 30 seconds of it. In previous releases, you would have to import the clip to the Library (the storage pane for your media) and drop the entire two minute clip onto the timeline before trimming it to size. Now you can trim the clip in a popup editor and store the trimmed clip in the Library. Then you can add the trimmed clip to the timeline when needed. This may seem a trivial difference but when editing complex projects it is a real benefit.

Many other features have been improved in this release. These include speed improvements, support for more video formats and codecs, additional text effects such as neon and fire, an enhanced ‘video collage’ designer to let you do split-screen effects with multiple clips, and an improved screen recorder.

The screen recorder tool is useful for anyone making screencast videos that show software being used: for example, if you are creating software tutorials or reviewing games. You can also include webcam video captured at the same time as the screen but this has the significant limitation that the webcam and screen-capture will be recorded together into a single video clip so you can’t subsequently edit the webcam video by moving and resizing it or applying Chroma Key. I queried this with Cyberlink and they provided a suggested ‘workaround’ which involves recording the webcam from the main PowerDirector workspace and then recording the screen separately using the screen-recorder tool. While this may work it is not exactly simple. Even an inexpensive video package such as Movavi Video Suite provides a better webcam/screencast recorder than that! And if you are doing regular screencasts, Camtasia remains my top recommendation.

In addition to the things mentioned above, PowerDirector also comes with a large range of effects and transitions, with excellent ‘colour matching’ capabilities, support for 360 degree videos, motion-tracking, multi-camera editing and auto-synchronization of clips by aligning sound wave patterns.
Hers is Cyberlink’s promo video, highlighting some of the software’s notable features…

Here I have been reviewing the Ultra Edition of PowerDirector 17. There is also an Ultimate Edition which includes additional plugins and effects (£99.99), plus a subscription edition which can be paid for monthly (from £5 per month). Refer to the PowerDirector Version Comparison for more information: https://www.cyberlink.com/products/powerdirector-video-editing-software/comparison_en_GB.html

This is another great release of PowerDirector. While it is priced towards the hobbyist end of the market, don’t be fooled into thinking it is for amateurs only. In fact, it now has an excellent range of pro-level features. For the serious video editor on a tight budget, PowerDirector is my top recommendation. And even serious video editors with a bigger budget would do well to check it out. Not only are both the feature set and ease of use good but also (and this is one thing that I really value) the speed of rendering is unparalleled. It’s a shame that the video size is not equally efficiently optimized (I use Handbrake to reduce the size before uploading big videos), but, well, I guess you can’t have everything!

Posted by Huw Collingbourne at 09:49

I’ve got news of a massive deal on programming tutorials. It's called: The Ultimate Programmer Super Stack, and it comes courtesy of Cary Richards at Infostack.io.

The Ultimate Programmer Super Stack is a collection of 25+ premium ecourses, bestselling ebooks, and resources that will help programmers:

Learn a wide range of today’s most popular (and lucrative) languages and frameworks, including everything from Python, Java, JavaScript, and Ruby, to HTML, CSS, and Kotlin…

Discover how to build APIs, websites, and iOS and Android applications from scratch
Master the soft skills you need to become ‘Coder Complete’ 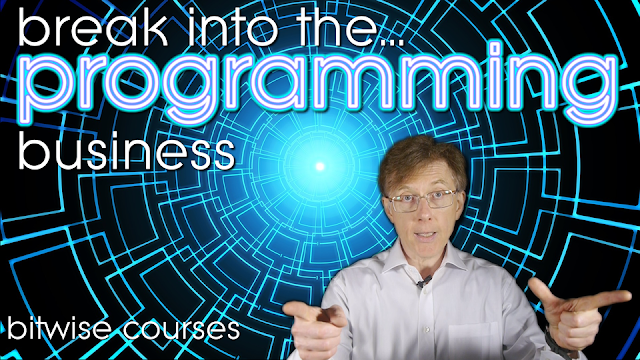 This great value bundles also includes one of my own courses: “Break Into The Programming Business” which gives you a quick overview of the programming languages, jargon and technologies that you need to understand when you move into the professional world of software development.

Posted by Huw Collingbourne at 06:50

The most important thing to know about the string data-type in C is that there isn’t one! Many other languages such as Java, C# and Pascal have a string type which lets you create variables to which string literals such as “Hello world” may be assigned.

In C, you can create  and initialize a string like this:

A string is always terminated by a null '\0' character. It turns out that when you initialize a string at the time of its declaration, as in the example above, a null terminator is added automatically. The first null terminator found in a string will be treated as the end of that string. So, given this declaration:

This is what is displayed (because the string terminates on the '\0' character):

In C, I can declare and initialize strings either by placing a pair of square brackets after an identifier or by preceding the identifier with an asterisk (or ‘star’) like this:

At first sight, these two declarations appear to be more or less equivalent. Each is initialized with a string and I can display that string using printf like this:

In fact, the apparent similarity is deceptive. In order to understand why, we now have to get to grips with one of the most challenging aspects of the C language – pointers.

In the example above, the asterisk or ‘star’ (*) indicates that the variable str2 is a pointer to some memory location. In this case, this happens to be the memory location where the array of characters forming the string “Goodbye” is stored. Each piece of data in your computer’s memory is stored at some memory location or ‘address’. You can display that address using the ‘address-of’ operator & placed before a variable name. This is how I would display the addresses of str1 and str2 (note: it is normal to use the %p format specifier to print an address as a hexadecimal value. Many programmers find hexadecimal hard to understand, however, so in this example I use %d to print an address as a decimal value):

If you ran this code, it would display some numbers such as:

These are the addresses – that is, the positions in your computer’s memory where these variables live. Now that we have the addresses of the variables, let’s take a look at their values – the data which they store. Here I will print out the address of each variable followed by its value shown first as an integer (%d) and then as a string (%s):

And this is what is displayed (though the actual numbers may vary):

THE VALUE OF AN ARRAY NAME IS THE ADDRESS OF THE START OF THAT ARRAY.

I’ll have more to say about arrays, pointers and addresses in a future lesson.

Posted by Huw Collingbourne at 02:06