MAGIX Video Pro X8 is a powerful video editing program for Windows. It lets you import video and audio clips, synchronise and edit them on tracks in a timeline and produce a final video in a variety of standard formats, or burnt to a DVD or Blu-ray disk. 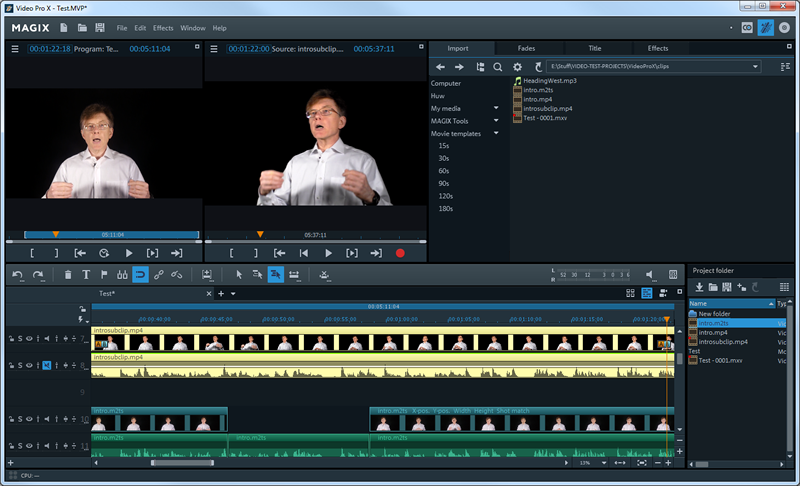 The workspace is broadly similar to other video editing programs. At the bottom half of the screen there is a multi-track timeline onto which you place your source clips. Above this there is a vertically-split area. To the left is the video previewer. To the right is a multi-function tabbed panel where you can browse files on disk, select fades, transitions and effects or add titles in predefined styles. The video preview area is further subdivided so that one part shows the video on the timeline while another part shows the clip selected in the file browser. If this layout is not to your taste it can be configured by moving and resizing windows and saving your arrangement by name. There are also some preset window schemes including one to optimize the layout across multiple monitors.

As two video clips can be viewed simultaneously, this makes it easy to make adjustments to colour and contrast so that, for example, two videos recorded by different cameras (which may have different ‘colour temperatures’) can be adjusted to look more like one another. Colour and contrast adjustments can be made at a precise level by tinkering with individual options and parameters. Alternatively, a more automated way of matching the colours of clips is provided by the new ‘shot match’ tool.

This Shot Match tool displays two clips in the adjoining preview windows and lets you immediately apply the colour characteristics from one clip to another. If the end result is not quite what you want you can use a colour ‘pipette’ to select specific colours from the first clip and apply them to the second clip. For example, when I applied the colours from one clip to another, I found that the flesh tones looked a bit washed out in the target clip. So I selected a face in clip 1 and applied it to the face in clip 2. Now the flesh tones were right but the white of a shirt in clip 2 had taken on an undesirable orange tinge. So I selected the shirt in clip 1 and dropped the colour onto the shirt in clip 2. This fixed the problem so that the colours in both clips now looked pretty much identical.

Effects such as colour matching, zooms, rotations and filters are all applied to specific sections of a video as keyframes on a timeline. The keyframed timelines are shown in their own docked editing window which gives you a fine level of control over the effects. However, effect keyframes can be fiddly to edit as the effects timeline panel is quite small and cramped in the default window layout. If you have a multi-monitor system, however, you can give more screenspace to the panel by placing the video preview on a second monitor. In fact, you can even undock the effects timeline and maximize it on a second monitor if you need to do serious editing work.

There is also a fairly sophisticated built-in audio editor. This lets you tinker with the sound on multiple audio and video tracks, making adjustments to the stereo mix, normalizing audio (to achieve a consistent volume) across multiple tracks, remove background noise (hums and hisses) and apply effects.

If you need to add titles and captions, that’s no problem. Click an icon to add some text and then set its properties (font, colour, animation) in a panel or select a title pre-set with styles, graphics and animations predefined.


To get started on a new video, you need to create a project and select a directory on disk as the ‘project folder’ which contains the source clips. You can also import or record new clips from a connected camera, webcam or microphone. A screen recording tool lets you record ‘screencast’ clips direct from your PC’s screen. When recording from the screen you can select rectangular areas in various standard sizes.

Optionally the audio can be separated from the video and shown, with its waveform, on a separate track. Unlike some rival programs, such as Cyberlink Power Director, the view of the waveform remains visible when you move tracks, which facilitates the precise visual alignment of tracks recorded by two cameras or by a camera and a microphone. In fact, while this sort of visual feedback is useful in most cases it may not be needed since you can just select two tracks and auto-align them from a popup menu item. There is also a very neat multicam editor that lets you import up to nine tracks, synchronize them and edit them together interactively. Unlike similar tools in some other video editing applications, the multicam editing takes place in the main editor, not in a popup window. You just have to be sure to leave the top two tracks free. Then when you play the videos on the timeline, each clip is shown in its own little preview box. To edit the clips together during playback you just click the preview box of the clip you want to appear in the final video at any given moment: click the clip on track 3 at the five-second position and that clip is added to the final video that is being assembled in track 1; now click the clip in track 4 at the ten-second position and that clip is added, at that time-mark, to the video being assembled in track 1. The audio from the selected clips is simultaneously added to track 2. However, if you want to use a ‘master audio’ track to be used throughout the final video, you can assign that to track 2 instead. This is a very neat tool that makes it very easy to synchronize and edit together multiple camera shots for your final video.

On the whole VideoPro X is a nice, fast and responsive program that makes it simple to edit and produce videos. Even though it has many quite advanced features, the learning curve for a newcomer is not too steep. In fact, if you have already used some other video editor, you will probably be able to get started with this software in a matter of minutes. The one thing I do find slightly annoying is its use of cascading popup menus. For example, if you want to align the audio of two tracks you have to right-click a track to show one menu then select the function you need from a second menu that pops up alongside the first. The navigation between the two linked menus can be a bit hit-and-miss (the second menu vanishes if you don’t move your mouse directly onto it) but this is a relatively minor criticism. One other unremarkable feature is the rendering speed - when producing the final video - which is quite sluggish. Even with hardware acceleration turned on, it takes much longer to produce a video than with Cyberlink PowerDirector (whose fast rendering is a notable feature which I only wish other programs could match). On the plus side, however, all the principal functionality is gathered together in a single unified editing interface. You won’t have to load separate environments or modal dialogs in order to edit and produce your videos.

When evaluating any piece of software, it all boils down to one important question: would I want to use this on a regular basis? The answer to that is an emphatic yes. Video Pro X is significantly better than low-end packages such as Corel VideoStudio Pro (at about £60), it is cheaper than high-end packages such as Davinci Resolve Studio (over £700) or Adobe Premiere (licensed annually for about £200 per year). I would have said that one of its closest competitors was Sony Vegas (about $600), so it is interesting to note that MAGIX has recently acquired Sony Vegas, and some other Sony software products. No specific information on how the company intends to develop Vegas or position it against Video Pro X was available at the time of writing. I have been told that the intention is to retain them as two distinct products, however, rather than to attempt to combine their functionality.

Overall, it is my view that Video Pro X’s combination of a good range of features and a well-integrated environment gives it the edge (apart from its slower video rendering speeds) over a mid-range package such as Cyberlink PowerDirector (at £150 to £350 for the top-end editions; see my review: http://bitwisemag.blogspot.co.uk/2015/10/powerdirector-14-review.html). Also, bear in mind that MAGIX fairly often runs special discounts (I see these advertised all the time on Facebook and elsewhere). So if you shop around you may even be able to get Video Pro X at a bargain price.

Licence: A single licence allows the software to be installed on two computers
Posted by Huw Collingbourne at 03:24